What is an Impacted Canine? 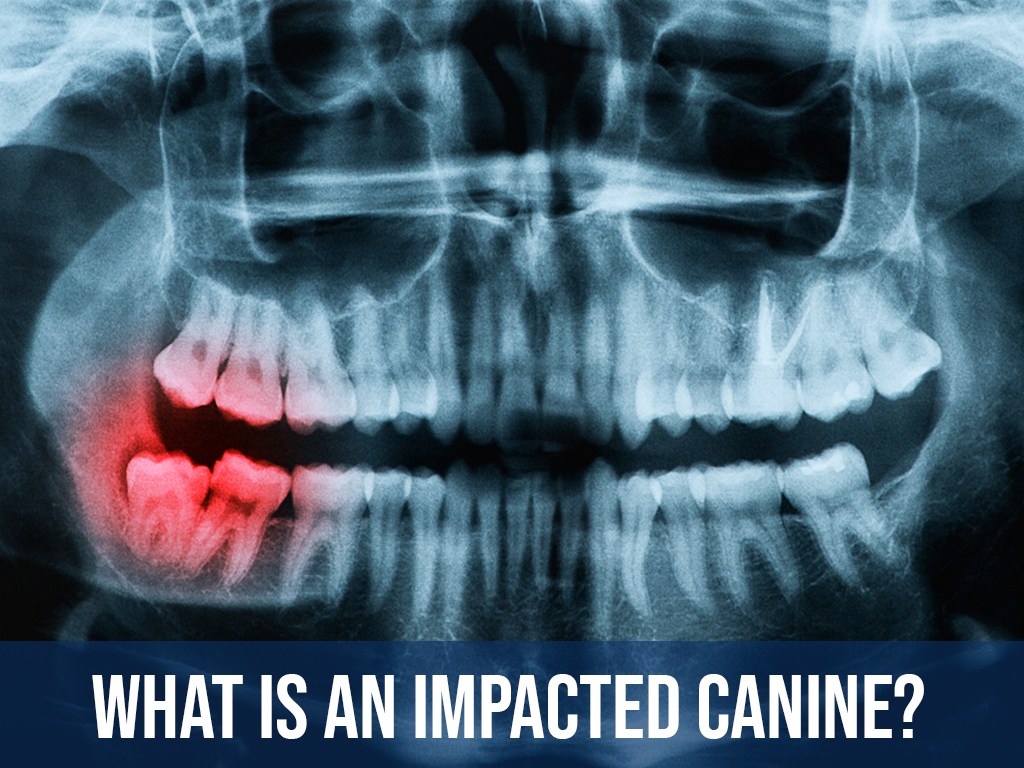 What is an Impacted Canine?

How your teeth grow can affect your appearance and how you smile. For good appearances generally, your teeth need to be properly aligned. Impacted canines happen when both of a patient’s canine teeth remain at the alveolar bone, which is the ridge of the bone containing the tooth sockets. This results in the teeth being in an ectopic position.

Identifying orthodontic issues on time is a very good way of reducing extremities. An impact can either be partial or full. A partial impaction of the canines is a situation where parts of the canines are visible while the full impaction is when the teeth are buried. The canine teeth are also known as the eye of the teeth as they are found in the upper and lower jaws of the mouth. They play a significant role in tearing and are also very important in the appearance of a smile. IN the eruption of teeth set and appearance, canine teeth have the longest path of eruption. Where a canine tooth fails to erupt completely, it may leave a gap in between the incisors and the premolars.

When an impacted canine is noticed on time, especially in a child, the individual should be referred immediately to an orthodontist team, which also includes an oral and maxillofacial surgeon. Early detection of an impacted canine can help in proper correction and normal growth of the tooth.

In some cases, abnormal growth on the soft tissues of the gum may affect the growth of the canine tooth, which can lead to an impacted canine.

Other causes of impacted canines include:

The importance of canine teeth

Aesthetics of the canine teeth

It is found that canine teeth usually have a darker colour than the incisors, which gives a balance between the lightly coloured incisors and the posterior teeth.

An eruption of canine teeth

Canine teeth are usually the last to erupt, which gives them very limited space to work with. Impacted canines if noticed on time ensure a very successful treatment because the older a patient with impacted canine gets, there is a possibility that the impacted canine tooth may not erupt normally even if there is enough space for proper eruption.

Dental examinations, as well as X-ray screenings, should be carried out early enough on patients between the ages of seven to enable the dentist to determine whether there is a problem, with the canine tooth. Usually, in other cases, the baby canine tooth is removed to create sufficient space for the permanent canine teeth to erupt very well and in the right position; this is usually carried out on patients between the ages of ten to thirteen years. In other situations, braces are to be placed on the teeth to enable the teeth to erupt properly.

Consequences of an impacted canine

Having an impacted canine which is not treated will result in the canine teeth staying buried, which might give problems to the patient. An untreated, impacted canine might continue to grow inside the gum in an attempt to find space to grow; the impacted canine may be growing behind other teeth and can end up damaging other adjacent teeth by eating away their roots which might cause some form of pressure and intense pain. An impacted tooth if left untreated can cause a cyst to form around the impacted tooth crown, which may push the tooth out of their normal position.

This type of treatment would involve a small cut in the palate to enable the crown of the impacted canine to be exposed; however, this process is done with the use of anaesthetics. This procedure is done by extracting the adjacent teeth to leave some space for the canine teeth to erupt; however, this is also dependent on the availability of space left for the canine teeth to grow. During this process, the use of orthodontic treatments such as braces is used in helping the teeth to align to its proper position. The exposure treatment of the impacted canine teeth helps to prevent future problems with the canine teeth and also helps in aligning the teeth to give the patient a better and more beautiful smile.

The removal of the impacted canine teeth is another way of treatment. This procedure can be resorted to only when it is impossible for the canine teeth to be properly aligned to its original position without causing more problems for the adjacent tooth or all the other teeth as well. This procedure is carried out under local anaesthesia or general anaesthesia. The tooth, when erupted, leaves a gap which is, of course, noticeable which a bridge or denture may be used to correct this gap.

This type of procedure is usually resorted to where a surgical exposure fails or would not be suitable for the correction of an impacted tooth. Before using this method, there should be enough space between the teeth. The dentist or doctor starts by removing the baby teeth and the impacted canine teeth, after which, the permanent tooth is put in its right position. After this procedure, the tooth is usually braced for about two to three weeks to allow the tooth to sit properly in its rightful position.

Instances where a canine tooth cannot be corrected

Noticing an impacted canine tooth is very important because it would help in early treatment and proper alienation. Dentists and clinicians should be able to formulate a treatment that would be suitable for their patients and also knowledgeable about the various available treatment options.

Get free consultations with Chatfield concerning the treatment of an impacted canine?

At Chatfield, we give a free consultation to patients that are affected by an impacted canine. If you have any questions whatsoever concerning impacted canine teeth and the treatment, feel free to contact us at Chatfield; our qualified team will be available to answer you.

If you also want to have a face to face consultation concerning impacted canine teeth, we also are happy to help you out. Book an appointment with our professional orthodontists and general dentists’ today.

Chatfield braces is a fantastic place to go for your teeth, and I go a great distance to get there. The dentist was extremely comforting, did not humiliate me for my oral health (I had bad experiences) and explained all I needed to know in detail...The rates are reasonable, they do not try to take advantage of you by pressuring you to get extra work done, and I was pleasantly pleased at how painless my fillings were. Overall, it was a positive experience, and I have faith in them. Reception is also a kind and responsible individual, and I loved her attitude.

I had visited some other dentists for consultations about my crooked teeth because although I had been putting it off, I was determined to have them straightened. Chatfield Dental Braces impressed me the most and they explained the treatment very well. The trays were easy to get on with and the treatment has given me my confidence back. I am very pleased.

I just finished my orthodontic treatment with the Chatfield Braces team in London. I had a major problem with spacing in my mouth. I was remembering that I had always had teeth gap. In the beginning, I had a pleasant consultation during which the dentist outlined all of my options. I chose metal braces since they produced the best results and were the quickest. For me it was so important to get result in fastest time. I've been wearing these for over two years. Every month, I had check-up sessions where the dentist explained changes and future choices while taking my viewpoint and expectations into consideration. Throughout the procedure, communication was excellent; I got the impression that I was being well cared for, and that the dentist was doing what was best for me and that my viewpoint was valued.

I have spent hours online trying to find an Invisalign provider with flexible payment plans in Battersea, and Chatfield has been the best by far. Their plans with minimum monthly payments helped all our family members get Invisalign at the same time. Because of the pandemic, we didn’t want to visit the office every couple of weeks, so instead our new aligners were delivered to us every time. It makes the whole treatment easier, especially for those of us who work on the weekends. The staff were great too, and never got any of our aligners mixed up, something that I thought was definitely going to happen. Great customer service too, We couldn’t wait to get Invisalign but it didn’t work so well, turns out they weren’t wearing their aligners and the dentist found out and introduced us to Invisalign Teen so they would wear it all the time.

Chatfield braces have been a part of my life for about years and years. I got braces with them around three years ago and am really pleased with the results. Chatfield braces london have remained a component of my oral care since then. Everyone was so professional and polite that the excellent experience starts with a huge smile on your face at reception. They definitely know how to make everything seem so professional and wonderful! My most recent appointment to the hygienist in Chatfield braces was fantastic; I'm really pleased with her job, which left my teeth shining clean! I went to visit the dentist next week. My dentist had the hands of an angel, and I spent hours with her and her nurse. I felt quite relaxed and well-cared for. Thank you to everyone at Chatfield Braces for making coming to the dentist so enjoyable. Especially in these odd times, making us feel safe makes all the difference.